In April, 2016, ArtWorks for Freedom was on full display at the University of Wisconsin – Madison in partnership with the 4W Initiative’s STREETS Project. Our campaign featured outdoor exhibits, fine arts presentations and participatory arts projects. 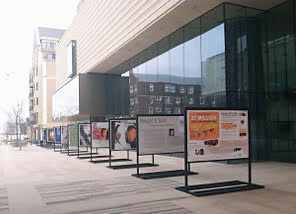 During the campaign, the Chazen Museum of Art hosted ArtWorks’ groundbreaking outdoor exhibit, “Bought & Sold: Voices of Human Trafficking” by Kay Chernush,  and Edgewood College presented our mural series, “What You See is Not Who I Am.”  We were also excited to feature contributing artist Molly Gochman’s  Red Sand Project — sidewalk convenings during which passersby are asked to  fill pavement cracks with red sand to draw attention to the vulnerable and marginalized people who fall between the metaphoric cracks and are exploited by human traffickers. Molly’s fine art prints, derived from her own Red Sand sidewalk transformations, were on exhibit at the Pyle Center.

During the campaign, we were thrilled to have two new Golden Doors to Freedom created, one by UW students and one by clients from Project Respect, a women’s center that provides advocacy and support services for women survivors of sex trafficking. Led by contributing artist Bill Adair, individuals help transform an old, abandoned door into a piece of art adorned with gold leaf and messages carrying hope, reflections and commitments to fight human trafficking. We were particularly honored to work with Project Respect and enable the women to express their thoughts and emotions related to their first-hand experience. While in Madison, Bill also exhibited his own fine art watercolors – inspiration for the golden doors project – at the Overture Center for the Arts and gave an artist talk. The campaign ran jointly with the 2016 Summit on Women, Gender and Well Being where ArtWorks Executive Director Michele Clark was joined by CBS Travel Editor Peter Greenberg in a discussion about “Human Trafficking: What’s the Real Story?”

Many thanks to our campaign partner, the STREETS Project and its co-director Jean M. Geran. We are also grateful for in-kind donations from Crescent Moon Antiques and Salvage and Sepp Leaf Products, which made the Golden Doors to Freedom possible.